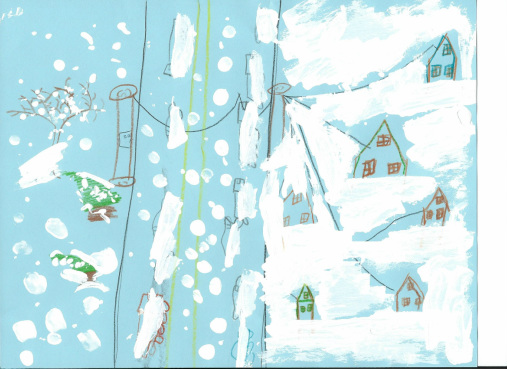 I drew/painted this picture of a blizzard. This picture shows cars stuck on a highway, houses buried in snow, power lines down, and trees blowing in the wind. This is what a blizzard looks like.

According to The Weather Channel a blizzard is a storm with "winds of at least 35 mph, and visibility reduced by falling and/or blowing snow to less than 1/4 mile."  These conditions must last for at least 3 hours.  Snow forms when two air masses collide one with warm air and one with cold air they collide and make a front if there is more cold air it creates a snow if there is more warm air it will just rain. When this snow is combined with the wind, and decreased visibility, it forms a blizzard.

- A blizzard can shut down a city, sometimes for days.  Transportation can be impossible.  This means kids miss school and adults cannot get to work.  People can be stuck in their homes for days.

- Electrical wires often go down because of the heavy wind and snow.  This leaves people with no electricity. Without electricity, people can't use computers, TVs, appliances, and lights.

- If people are caught outside in a blizzard, they risk getting frost bite and hypothermia.

- A blizzard can cause lots of property damage, such as roof cave-ins and windows breaking. Trees can fall on houses, cars, etc.

- Blizzards can be the cause of lots of car accidents.  Cars can be stranded on highways too.

-Blizzards are life threatening storms.  People have died in blizzards.

- Blizzards can hurt the economy.  People can't get to work.  Jobs don't get done.  Businesses and stores lose money.

How blizzards affect the land....

- Trees, plants, and crops can die in a blizzard, because of the extreme cold.

- Tree branches and limbs can break.

- Flooding can happen after a blizzard.  This happens when there is a warm up after having large amount of snow.  The snow starts melting faster than land can absorb it. 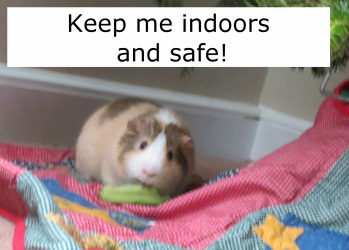 - Blizzards can be life threatening to pets, farm animals, etc.  They can die if exposed to the cold.  They can also get lost and not be able to find their way home during a blizzard.

- Pets should not be left outside during a snow storm or a blizzard.